The stuff I do works as well on PCs and for people who don’t turn up to work on a unicycle.

Software is the road map your computer uses to do stuff. Microsoft Word & Excel, Photoshop, iTunes; These are all bits of software. Some people call them Apps, but they should maybe get over themselves.

I use this funky programme called ‘FileMaker Pro’, if you’ve got a Mac, you’ve probably heard of it. They used to say you could make databases with it but in the last few years, the word database has become very 1970s-radio-DJ and now they say we make Custom Apps. It’s not just software for Macs.

Why would you need a Custom App?

Do you write a lot of software? Do you do it repeatedly?

Have you ever thought ‘There has to be a better way of doing this?’

Quite often I will advise you not to have a piece of software created especially for you as there is probably something on the market that will do what you want. If there is – use that. Maybe, what you are doing doesn’t need anything special, just a little more knowledge?

Some people though, do need a little more help.

Custom apps can be simple…

Simple, basic, but can be so much more.

How about if you want to keep scans of passports of all your contacts and you want reminders of when these are going to expire?
You might want to select multiple contacts and send them all the details of upcoming jobs
You may want to send details of multiple contacts to upcoming employers (driving licenses, CRB forms, SIA certificates etc) along with a professional spreadsheet of dates of birth, mobile numbers and next of kin emergency info.

They can be a bit more complicated …

Music database What? I’ve already got iTunes and Spotify.

Do you have a back-catalogue currently in Pro-Tools, on 2” tape or all on hard drives?
Are they in various storage units unable to be accessed, let alone listened to?
Would you like to add in details of venues, performers, show reports, track info, recall info etc?

They can be a complete Suite of Software

We could start with something simple and let it grow. Your contacts database can then become a job-booking system, which can then create itineraries for your people in the field. These can either be printed or accessed on their own iPhone or iPad app. Read more here.

Anything is possible – the world is your oyster. And I’m that hook thing you use to get into the oysters. And the lemon; I’m the lemon as well. 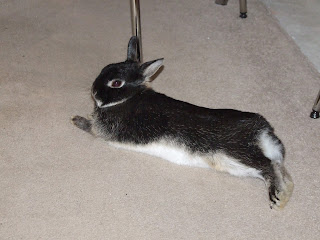 We have a house rabbit. We wanted to be quirky and hipster, but I’m too old and didn’t want a beard – so we got a house rabbit who taught me to never give up. He’s called Cookie, hops around the house and occasionally retires to his hutch fitted into one of the kitchen cupboards that used to house saucepans.

We expected him to live for about five years but now he’s eight, and until last week, there was no sign of him letting us put the saucepans back. Last week however, he started falling over and we thought he had reached the end of his carrot fuelled existence.

We put him on 24-hour balancing watch and pulled out a catalogue for a new set of pans.

After 2 days of comedic tripping, he is now sat looking at us, all fully non-capsizing, as if the last few days were just a strange human dream, and we should get over ourselves and produce more carrots.

I have written a lot of software for people and companies and, sometimes, for any number of reasons, the dream that was originally asked for becomes a white elephant that nobody uses.

In order to prevent this happening, I mostly encourage companies to start small. Get a piece of software that addresses a couple of key issues that all their staff can use, and get used to for a few weeks or months. I find that once that is being used, it will naturally bring up questions along the lines of ‘can it do this?’which more often than not will not be part of the original remit.

This has two very important functions –

1. It is wayyyyyyyy cheaper than getting the whole thing made in one go

2. It allows the company to find out what is actually needed, rather than what it thinks it needs

I used this method for a small company late last year. I made them a pretty nifty bit of kit (even though I do say so myself) which allowed one person, who does all the data entry to slash her working hours so she can get on with the rest of her job.

All the right noises were made and it seemed like a great start; I got paid, which is always a good test of my software!

Then nothing. For four months. Not a word. I had only given them an example, so I knew it wasn’t being used. I felt a little like I had cheated them.

However, two weeks ago, I got an email out of the blue thanking me for my Christmas present that had just been received (this was in March) and, could I come in and install the software. They’d all had a lovely break and were now all back and ready to go for the new year.

I have now installed and I’m trouble shooting. It’s all going rather well for them and, therefore, for me.

So, just like Cookie, I have to remind myself, never to give up. There are always more carrots to be eaten and although we might think what we do is the most important thing in the world, other people have different agendas.